DUE TO CURRENT HIGH DEMAND ESTIMATED TIME TO DISPATCH CAN BE UP TO 3 WEEKS.

GREATEBIKE.EU specialises in the sale and testing of e-bikes with central motors. We spoke with with Ing. Jan Havlicek, leader of AGOGS electric production.

The power of an electric bike that legally travels on public roads should always be at the level of 250W. Therefore, manufacturers are turning to another parameter, the rotating force effect, which is measured in Newton meters (Nm).

'High torque is the main reason the more and more riders are choosing only central motors', explains Havlíček. 'The rear and front motors only offer around 30Nm and a centre drive now has up to 90Nm.'

Riders of e-bikes with a central drive also often notice a more natural feel of cycling. 'After all, the centre of the e-bike is where a classic bike has pedals, and the central drive perfectly imitates this function,' says Havlíček.

"A motor located in the centre of an e-bike also has an effect on the balance. The centre of gravity is more below the rider and the e-bike is easier to control,' he adds.

Other benefits? Users also remark that they have the ability to control the speed of torque transmitted to the rear wheel by changing gears.

Among the disadvantages is the wear on the chain, which has a higher pressure in the centre. We recommend that customers have the chain replaced after 700 to 1,500 km of cycling.

Looking for a central system at a good price?

From the current range, the best service and 'price/performance' are offered by e-bikes with a Bafang motor from Agogs, the Bosch Active Line version from Apache and MTB/trekking e-bikes with a Shimano Steps motor from Leader Fox or Apache. 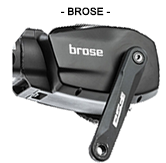